Pulmonary fibrosis is a chronic lung disease where the tissue in the lungs becomes scarred and stiffens over time. Like all diseases, PF does not discriminate and there have been many celebrities who have suffered from the condition. Sadly, some have lost their lives to the disease.

According to Wikipedia, here are seven famous people who lost their fight with pulmonary fibrosis.

Marlon Brando
Born in Nebraska in 1924, Marlon Brando Jr. went on to become one of Hollywood’s acting legends. Famous for starring in such iconic roles as Vito Corleone in The Godfather and Terry Malloy in On the Waterfront. Brando died from respiratory failure in 2004, following a long fight with pulmonary fibrosis and congestive heart failure. He was 80 years old.

Peter Benchley
The New York-born author is most well-known for writing the book and screenplay, Jaws. The book was published in 1974 and remained a bestseller for 44 weeks. The book was then made into a film in 1977 and made more than $470 million worldwide. He died in 2006 following complications from pulmonary fibrosis at the age of 65. 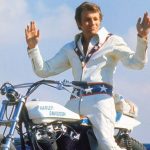 Motorbike stunt artist Evel Knievel (born Robert Craig Knievel) broke many world records and was famous for his death-defying stunts in the 1970s. Knievel was rumored to have broken or fractured more than 40 bones during his career, but he was a staunch advocate for safety helmets. Knievel’s organs were not as resilient as his bones — he suffered from hepatitis C and needed a liver transplant.  In 2005, he was diagnosed with idiopathic pulmonary fibrosis and required 24 hour oxygen therapy. He died in 2007 at the age of 69.

Scott Brady
With a career spanning four decades, Scott Brady is best known as a Hollywood actor who specialized in Western films and television programs. Born in 1924 in New York, Brady moved to L.A. in 1946 to pursue his acting dream.  He was diagnosed with pulmonary fibrosis in 1981 and required oxygen therapy until he passed away in 1985 at the age of 60.

Joanie Spina
Joanie Spina was a dancer, choreographer, and magician who became famous working with the renowned illusionist David Copperfield. As well as having pulmonary fibrosis, Spina was also treated for cancer. In 2014, she was due to have a lung and liver transplant, however she passed away before the procedure. She died in August 2014 at the age of 61.

John Barry
Born in Minneapolis, Minnesota, John Barry is most famous for popularizing the use of the household oil WD-40. Through clever marketing and advertising, Barry took WD-40 from an industrial product to a household product. In 2009, Barry died from pulmonary fibrosis in San Diego, California, at the age of 84.

Sheila Matthews Allen
Sheila Matthews Allen was a Hollywood actress famous for roles in the films Poseidon Adventure and Towering Inferno and TV shows like Lost in Space and The Waltons. Allen passed away in November 2013 after a prolonged battle with pulmonary fibrosis. She was 84 years old.

Research into respiratory conditions accounts for just 2% of all the medical research funding in the UK.

Will you support respiratory research?